Home / Uncategorized / Oil and Gas MLPs: Poised for a Rebound in 2018

After a four-year downturn in the oil and gas master limited partnership (MLP) sector, marked by a roughly 47% decline in market value, we believe sentiment toward the sector may be turning. With dividend yields approaching 8% – along with increasing free cash flow and a robust U.S. production outlook – MLPs could be an attractive option for yield-hungry, value-oriented investors seeking assets less susceptible to the impact of rising interest rates.

Factors behind 2017’s pessimism are largely behind us

Despite post-election optimism that the new U.S. administration would usher in a friendlier regulatory environment and that robust global growth would boost commodity prices (spot crude was up 12% in 2017), 2017 proved tough for MLP investors. The benchmark Alerian MLP Index underperformed the S&P 500 by 28%. Against a weak energy sector backdrop (the S&P 500 Energy Index lagged the broader index by 23%), dividend cuts that aimed to make MLPs self-funded entities ended up spooking the sector’s core retail investor base, while tighter access to equity capital markets led to a supply/demand imbalance. Fears that tax reform regulation would hurt the MLP model took sentiment to new lows, and years of underperformance meant MLPs were prime candidates to be harvested for tax loss sales, creating technical pressure in the final quarter of 2017.

A stronger foundation for 2018

While some of these concerns linger, we see several reasons for optimism this year, including projected growth in EBITDA (earnings before interest, tax, depreciation and amortization) from project completions and improved underlying fundamentals. Dividend cuts and deleveraging efforts over the past 12 to 18 months have helped MLPs evolve into stronger franchises with higher dividend coverage ratios (exceeding 1.2x on average), lower leverage (4.0x on average) and less reliance on capital markets. These painful but necessary actions should make MLPs more attractive to discerning investors.

From the perspective of after-tax returns to MLP unit holders, tax reform should clearly be a positive. MLPs are already highly tax-efficient, with about 80% of distributions deferred until units are sold. For the remaining 20% taxed in the current year, the ability to apply the pass-through tax rate (of about 29.6%) versus the roughly 37% marginal tax rate further increases the overall after-tax attractiveness of owning MLP units.

EBITDA for some individual companies, particularly those that transport natural gas, could see some erosion at upcoming rate case hearings, typically every five years (similar to utilities). However, the impact may be negligible, as a large share of pipeline volume is negotiated directly with shippers. In addition, many pipelines are under-earning a fair return, which limits the impact of rate case hearings.

Finally, the lowering of the corporate tax rate to 21% from 35%, along with the ability to utilize accelerated capex depreciation, may motivate many MLPs to reorganize into C corporation structures to reach a wider institutional shareholder base. Such “simplification” transactions have generally been positive for both debt and equity investors, as they better align the interests of management with equity holders and open the enterprise to a wider potential investor base.

While MLPs generally are not dependent on commodity prices, the sector has shown heightened volatility related to price changes over the past four years. A drop in long-term oil price expectations materially below $50 could bring the sustainability of underlying volumes back into question, especially for oil-focused MLPs. Moreover, the sector’s high cost of capital combined with anemic demand from the core investor base has challenged equity capital market access, which is critical to funding future growth.

Additionally, the midstream sector’s attractive cash flows have not gone unnoticed by private equity and infrastructure funds, which may have lower return requirements than publicly traded MLPs and have deployed capital into the sector aggressively over the past 18 to 24 months. This not only creates a risk of deteriorating returns on growth capital projects, but also may lead to overcapacity, which could dent long-term returns for existing assets.

We also acknowledge that tax reform could have a bigger impact on base business EBITDA than we expect. And as an income-oriented asset class, the MLP sector can be vulnerable to higher interest rates, even though the data suggest otherwise (MLP returns have been negatively correlated to higher rates on a five- and 10-year basis).

Finally, while many MLPs have taken proactive steps to adjust to the new environment, for others, coverage ratios remain low, the cost of capital is too high and leverage remains elevated. These few “bad apples” may continue to bring negative headlines to the sector, leading to a wide dispersion of returns and valuations ­– though this can potentially be an advantage for actively managed investment strategies.

We see the tide turning for the MLP sector after a frustrating 2017. The commodity environment is stabilizing, U.S. production growth trends are strong (see chart), MLP dividend cuts are likely nearing an end and balance sheets have improved. With the sector trading at a significant discount to historical valuations, we think MLPs could offer total return potential in the midteens, with support from a roughly 8% dividend yield and upside potential from multiple expansion. While this investment opportunity isn’t without risks, we believe MLPs may offer one of the most attractive risk-adjusted returns in the market today. 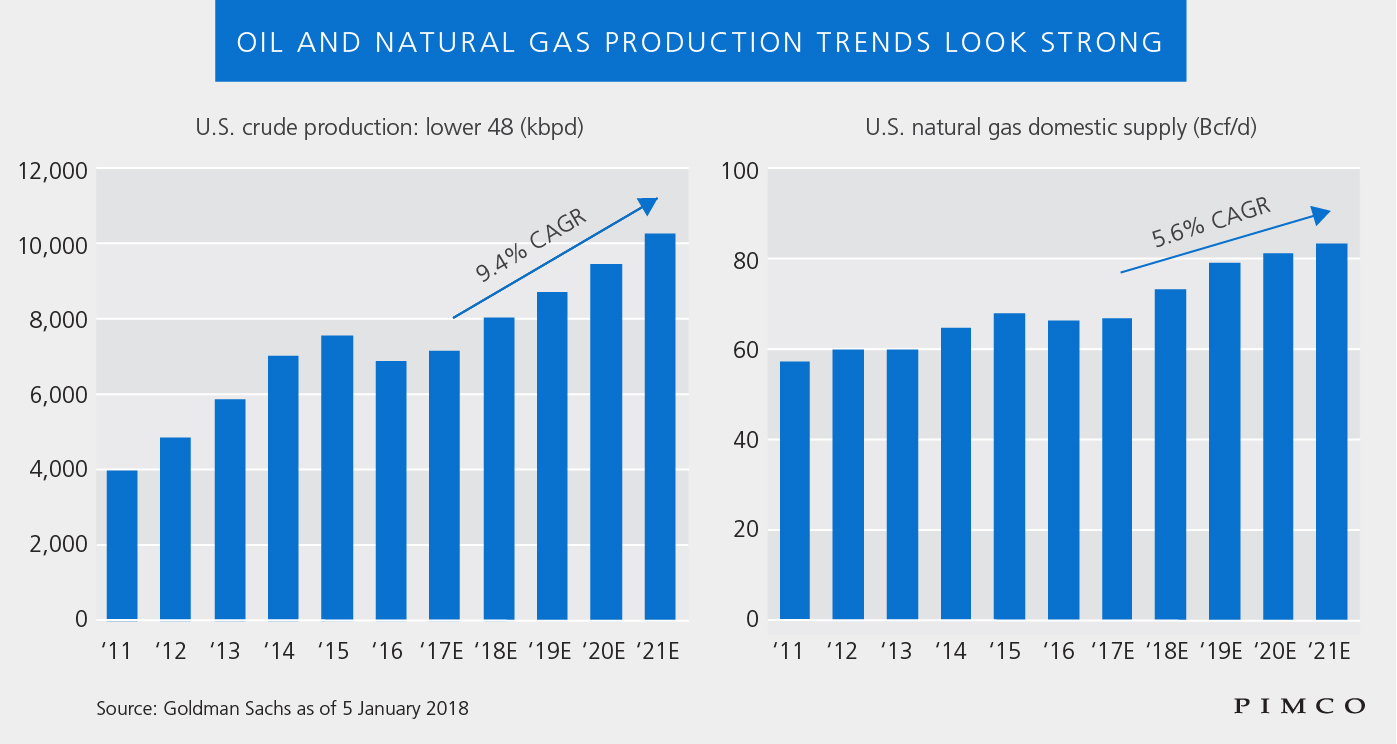